I Love You, Iron Man

Ben 10 Franklin is a crossover between Ben 10 and Benjamin Franklin.

Benjamin Franklin is doing his famous kite experiment, and gets electrocuted by lightning. The Omnitrix has appeared on Ben's wrist. He presses a button, and transforms into an alternate version of Four Arms, stating it is cooler than electricity.

Then, as an alternate version of Jetray, Ben finds George Washington and his men sailing through the Delaware River. He lifts their boat and flies in the air and the crew barfs. But then, some of the crew fall off the boat. Without thinking ahead, Ben becomes NRG, and since he cannot fly, they fall. Saying "Uh-oh, I don't think this guy can fly" and George Washington and the crew fall off.

Finally, Ben encounters the British army. He asks them to surrender, and the general asks who's going to make them surrender and call Ben Franklin "Little Round Man" and laughs. Ben then transforms into an alternate version of Humungousaur and beats up the British army by pounding and kicking them. Then, he asks if they would like it if he came to their country, so he goes to London and smashes Big Ben. Then, he goes to his old middle school bully Mark's house, and it looks like Mark has now become a nice person, and apologized to Ben for the mean things he did to him. But unfortunately, Ben does not seem to accept Mark's apology, and demolishes his house.

Ben Franklin: I, Ben Franklin, shall prove once and for all that lightning-- (Ben gets electrocuted.) Well, slap my face on a $100 bill. What do we have here? (He pushes the Omnitrix and transforms into Four Arms.)

Four Arms: This is so much cooler than electricity.

Thomas Jefferson: Who wants to sign the Declaration of Independence next?

Ben Franklin: Hmm, John Hancock's signature is going to be tough to beat unless-- (He pushes the Omnitrix and turns into Swampfire.)

Swampfire: I sign it in FIRE! (the paper catches on fire) We have more than one of these, right?

George and his Crew: Woah!

Jetray: Guys, check it out. I can shoot outta my eyes and my tail. (some of George's crew falls off the boat)

Jetray: Don't worry, I'll save them.

George and his Crew: Aah!

Ben Franklin: Gentlemen, I'm going to ask you to surrender.

John Burgoyne: And who's going to make us, little round man? Ha, ha, ha, ha!

Ben Franklin: Me, myself, and--

Humungousaur: HUMUNGOUSAUR! Take that and that. Yeah! How would you like it if I came to your country? In fact... Big Ben, meet Bigger Ben! YEAH! (USA!) Now there's just one more bit of business I need to take care of.

Mark's Wife: May I help you?

Humungousaur: Hi, is- is Mark here?

Humungousaur: It's me, Ben Franklin! Junior high? You used to tease me all the time and call me Fatty McGee.

Mark: Oh, Ben. Listen, for what it's worth, I'm really sorry.

Humungousaur: Oh, really? Hmm. I was gonna smash your house down. Well, uh, I did come all the way down here. Uh, do you wanna grab a burger or something?

Humungousaur: Oh, yeah, right, right. No, no, no, problem.

Mark: Listen, you take care of yourself. 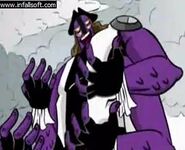 Ben Franklin as Humungousaur.
Add a photo to this gallery
Retrieved from "https://maditsmadfunny.fandom.com/wiki/Ben_10_Franklin?oldid=121643"
Community content is available under CC-BY-SA unless otherwise noted.