TransBOREmores is a take-off of Transformers.

This segment is from MAD Season 1, Episode 2: TransBOREmores / Star Wars: the Groan Wars.

Optimus Prime tricks Sam into finding the Rock of No-Talent-Tron in order to take a vacation.

Optimus Prime: I am Optimus Prime and I send this message to all Autobots. If you need to refuge, or just a place to crash for a few days, you can--

Sam Witwicky: Really? I don't remember buying 7 new cars and parking them in my living room.

[Radio turns into Frenzy and breaks oranges and plant.]

[Frenzy runs to Sam and pulls down his pants.]

Sam Witwicky: All right, that's it. You know, you need to get out of here. It was fine when you were saving the earth and all but it's--

Optimus Prime: What's that? The Decepticons are up to something really, really important this time. They want the uh.. [Looks at Dwayne Johnson poster] Rock of.. [Looks at Ke$ha poster] No Talent-Tron. Legend says its in some exotic place, maybe Paris. I always wanted to go to Paris.

Sam Witwicky: Go by yourself. I'm not helping you chase down another random robo-trinket.

[TV turns into a transformer and grabs Sam.]

Sam Witwicky: Fine. How are we getting to Paris?

Optimus Prime: By the power of your dad's wallet.

Sam Witwicky: Uhh. This is getting kind of boring.

[Accordion Plays and scene goes to Optimus and Sam in Paris]

Sam Witwicky: Ok. Do I really need to pay for your flights. I mean, He's a jet for crying out loud.

Sam Witwicky: And the Rock of No-Talent Tron. Right?

Optimus Prime: Sure. Why not?

[Remy climbs on the table and pulls out a bill]

Sam Witwicky: So the Eiffel Tower told you the rock is at my parents' time share in Hawaii?

Optimus Prime: He's one of our most trusted elders, Sam. We don't question it.

Sam Witwicky: Speaking of "we", who are these guys? Are they even TransBOREmores? I mean, I think he's just a car.

Sam Witwicky: And that's just a guy doing the robot.

Optimus Prime: Sam, two worlds at risk, trust is the most precious resource. Are you with us?

Optimus Prime: Great. Be a pal and get me another coconut mist, will you?

[Scene changes back at Sam's house, which is having a party with robots while disco music plays]

Sam Witwicky: How did they get in my house?

Optimus Prime: Maybe they found the key under the mat.

Sam Witwicky: There is no key under the mat.

Optimus Prime: Then it's probably that giant hole in your wall.

Sam Witwicky: OK, everyone and everything that is a robot, get out.

[Sam's desk, lamp and couch turn into transformers and leave too]

Megatron: Hey, bro, thanks for letting me borrow your "Iron Giant" DVD. I really--

[Both transformers go to each other.]

Megatron: Yeah, you beat me. See ya.

[Megatron walks out through the kitchen's wall making another hole in the wall.]

Optimus Prime: Wow. That was close. Good thing you're letting us live among you, or else he would have captured the magical tree of--

Sam Witwicky: I thought it was a rock. 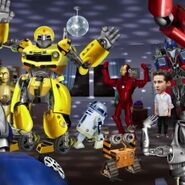 Picture of the Robot Party at Sam's place

Title of the segment
Add a photo to this gallery
Retrieved from "https://maditsmadfunny.fandom.com/wiki/TransBOREmores?oldid=124116"
Community content is available under CC-BY-SA unless otherwise noted.